Having just spent ten days road tripping the beautiful country of Ireland, we learned first hand just how informative it is to break the habits we’ve learned driving in the U.S..  The first challenge is adjusting to a driver’s seat on the right side of the car.  The next is to drive on the left side of the road.  It’s amazing how ingrained the tendency to want to drive on the right is after years of driving experience.

But worse were the roads themselves. They were made for horses and carts, probably at a time when there were one or two carts per day on any one part of the road. A lot of them haven’t changed. Cars pass each other on roads about the width of two cars plus maybe an inch or two, at anywhere from 30 to 60 miles per hour, with mirrors nearly brushing each other, and no one raises an eyebrow. The Irish drivers are used to it, and they don’t see why anyone would make a big deal of it.

In order to drive the country roads of Ireland, we found ourselves completely focused on the present moment, or “the now.”  What was happening now was the only thing that mattered. We didn’t have the luxury of planning ahead for a bus that was two-thirds the width of the road coming at us doing 50 mph. Right now we had to focus on the stone wall sticking a foot out into the road on our side and the bike rider who was coming the other way with only six feet until impact. We suspect we had reverted to lizard brain functions, without much other brain activity besides the reflexive slamming of the brake pedal and irrational leaning to the center from the passenger’s seat. Conversation stopped, the music on the radio was tuned out, our eyes shut out everything but what was on the road now. 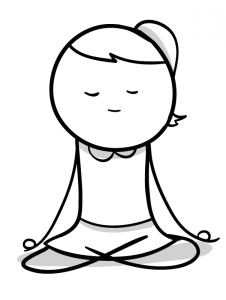 When we were out on a road near the Cliffs of Moher, we missed our turn for a parking lot, and had to turn off the main road onto a farm road that was – no kidding – one car wide. We couldn’t have turned around on that road if it were 3 AM and every other car in Ireland were off the road. But of course, someone right behind us turned onto that road too. We were probably the only two people to use that road in the last month. So we had to keep going for about two miles, dodging sheep, before we found a place wide enough to pull out to turn around.

A picture came to me on that road of the footage of mountain climbers at the top of Everest. If you ever get a chance, watch how they move. Their brains are low on oxygen, and so they can’t take for granted that they can trust their brains’ decisions. At sea level we put one foot in front of the other while texting and eating a burrito without thinking twice. At the peak of Everest, you take everything one step at a time, or your low oxygen brain might let you step out into thin air. Next thing you know, you’re a glacier.

There’s a documentary that shows the climbers in a lab with oxygen masks on. The scientists test their brain function with normal oxygen levels, and they put square pegs in square holes without a thought. But when they turn the oxygen levels down to Everest levels, suddenly they have to work out every step carefully. It can take ten seconds to accomplish what they were doing in one at normal oxygen levels.

That’s how it was for us driving in Ireland. There was a level of focus – just one thing at a time, no thought of multitasking – that was mystical. Even if a couple of years were shaved from our lifespans.

So what does this have to do with tests? It occurred to us that tests should be taken this way. Every year thousands and thousands of points are lost on easy questions by the habit of hurrying, and assuming that brains are judging properly. We’ve started telling our students to assume that their brains are like the brains of high altitude climbers: don’t trust them to multitask, or to hurry through even the easiest problems. Write out every step to be sure you’ve done each part right. Take the time to draw a picture when you need to. Read the question again to be sure you know what it’s asking. Read an extra line or two around the line the question is asking about to be sure you understand the context. (An example: A recent question we dealt with wanted to know the meaning of the word “history,” as used in the passage. It would be easy to assume that it meant something in the past. But rereading the line, we saw that the author’s concern was the events of future history.)

Don’t assume that your brain is making the right decisions, ten steps at a time. We do this on homework, or classwork because the penalty isn’t so bad if you make a goof. But on tests, every point is precious.

If students were simply careful enough to be sure they picked up all of the easy points, most of them would wind up with fine scores, even if they missed a few of the hard ones. And it can be hard to convince kids to work this way. It requires patience and focus, and it can feel a little childish to work this way.

But we do it ourselves, and we’re adults. When we’re running through test practice and demonstrating strategies, we work one step at a time, the way a bomb defuser would examine the wires pretty carefully before choosing which one to cut. Like Everest, Irish roads or tests, the consequences of hurrying, and not focusing, can be pretty heavy.

About the Author: Lisa Kurstin

Lisa Kurstin is a trained botanist and science educator, who brings two decades of experience as a classroom teacher and senior level administrator in California independent schools. Lisa’s administrative experience includes having served as a Director of Studies and Admissions Director in independent schools, as well as Education Programs Manager at Descanso Gardens in La Cañada Flintridge, California. Currently, Lisa is devoting time to test prep and college counseling.